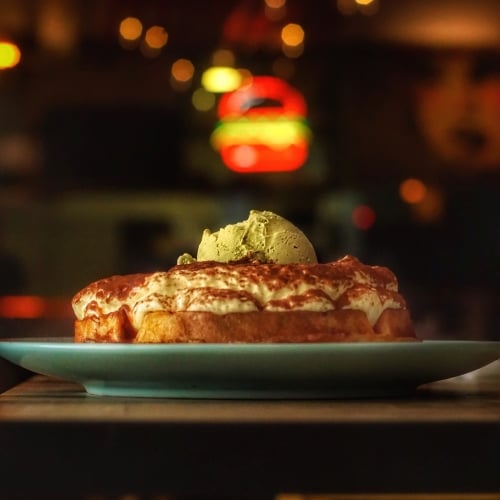 The Kovan stalwart was previously known for its endearingly nostalgic Chinese-Fusion rice bowls but this new concept is short for “Burger, Beer and Waffles”, signifying a change in direction.

Just tapping on its outer shell would yield an assertive thud that signals its crisp and cutting in releases a cacophony of crackles, before the knife is met with the surprisingly pillowy innards of the waffle.

Choosing Korean was the right choice it seems because the gochujang sauce layered immaculately atop the juicy chicken and the sweet maple sauce, kicking up a sweet-savoury storm reminiscent of the highly-raved Chicken French Toast from Supernova.

The latter was assembled with quite meticulous care towards balance — cream is fluffier and lighter than your usual tiramisu cream which helps steer it away from cloyingness. More importantly, the faint rum and coffee notes were a match made in heaven for the toastiness of the waffles.

As far as milkshakes go, these had most of the basic components down to a science. Biscoff lovers would be infatuated with the Lotus Biscotti ($8.90) and how it flaunts its rich buttery sweetness amidst a plush creamy texture that goes down effortlessly.

Those who like their buns saucy would appreciate the glorious mess of mushroom ragout, greens, and egg piled atop the patty. Ultimately though, it falls victim to its grandiose presentation as the slightly overdone patty, while juicy, didn’t explode with the decadence you’d expect.