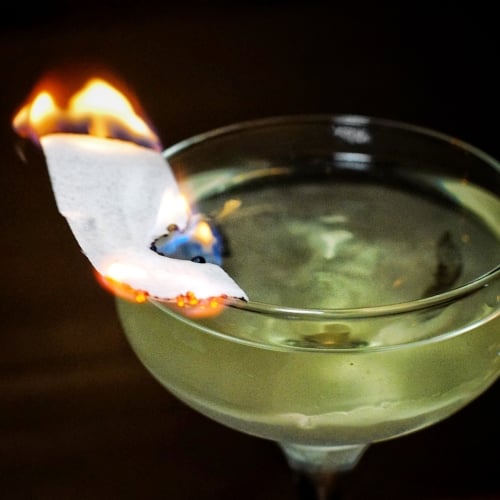 New beginnings are never easy, especially with an already thriving brand. For Papa Doble though, the rebranding from The Old Man Singapore is still in its early days but it’s been promising — they just clinched #61 on the newest edition of Asia’s 50 Best Bars, after all.

As iconic as The Old Man brand was, the Hong Kong stalwart had lost its lustre after significant personnel change so things were ready for a shake-up here at Keong Saik Road.

The team decided to persist in their devotion towards Ernest Hemingway conceptually but under a new guise, hence Papa Doble — the “Hemingway Special Daiquiri”.

Affectionately known as “The Fairy Godfather” in IG circles, Shah was a driving force behind several of the top bars in Bangkok after his relocation a few years ago. Even with a brief hiatus from bartending, he’s still got it in the tank even if the first few days saw him bid a farewell to his arms.

It will be quite the sight to see how the old man steers the ship into the sea. Perhaps he’s the last piece of the puzzle to get Papa Doble full steam ahead.

The rebranding is practically in name only as the superficial modifications are minimal. So expect the same standard of service and mixology while bating your breath for their first-ever menu refresh as Papa Doble.

First thing’s first — welcome snacks. Perhaps the most underlooked aspect of a bar experience but oh-so-crucial. It’s only fitting for the bowl to be filled with the most timeless of bar snacks that were originally popularised by stalwarts Jigger & Pony.

Perhaps not timeless in Hemingway’s essence but the nostalgia factor will wash over all of Papa Doble’s customers. That familiar chicken-tinged umami that throws you back to childhood Mamee snacks? Unmatched

Papa Doble is also ready to churn out food pairings for those afflicted with “kuchisabishii” (a playful Japanese term for “lonely mouth”).

And the imperative order would be the Basque Burnt Cheesecake ($16). The slice is procured from neighbour Olivia Restaurant, legendary for its molten-cored cheesecake.

Have faith that this slice will leave you in bliss starting from the silky caress of the cheese, infused with smoke and blue cheese salinity, before the almond sable base crumbles into the background.

But fundamentally, the paramount ingredient of a bar is its drinks. Mixology maketh bar. At its core, Papa Doble still exposes shadows of The Old Man. The menu hadn’t changed significantly after the overhaul — but R&D is in progress.

For one, my Negroni-loving heart swells for the Papa Negroni ($26). Admittedly, it isn’t quite the conventional Negroni profile — their spin injects a stronger vibrancy into the classic.

But Papa Doble’s rendition remains faithful to the Gin-Campari-Vermouth trinity. Except that the fruitiness is accentuated by high-quality Cucielo Torino Vermouth that softened the spirit-forward tipple with an elegant touch.

Most of the menus are represented by numbers that correspond to Hemingway’s bibliography. A potent temptress would be the #1940 ($24), a Manhattan alter ego with the added levity of fig wine.

Papa Doble’s spin echoes the harried intensity of 1940’s “For Whom the Bell Tolls.” The gravitas of rye whisky is met with the depth of chocolate, while a fig vivacity renders it easy to digest — much like Hemingway’s laconic penmanship.

Following up on “For Whom the Bell Tolls”  is a challenge but the #1952 ($24) is just peculiar enough to stand on the same podium, representing another of his magnum opuses, “The Old Man and the Sea”.

Easily Papa Doble’s most audaciously experimental, the #1952 welcomes fleeting notes of mild citrus before gliding into a herbaceous dryness reminiscent of ginseng. Sous vide capsicum distillate kicks in at the end, adding traces of spice to the lingering, authoritatively dry finish.

And it’s with #1952 that you see Papa Doble’s true essence. It’s not a classic bar obstinate to newfangled advances. It’s not an experimental bar that abuses the rotovap, either.

What Papa Doble embodies is a dedicated character study of the literary genius of Ernest Hemingway. A moveable feast that has fascinating potential as it continues to borrow from Papa Hemingway’s sophisticated literary backlog and tipple-rich life story.