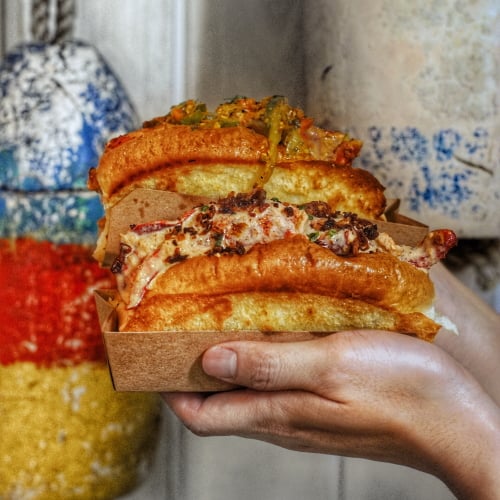 We Singaporeans are spoilt with the privilege of picking and choosing from a whole multitude of global franchises that have landed all around Singapore. You can find so many world-famous franchises here, from Shake Shack to Luke’s Lobster.

As far as lobster rolls are concerned, we’ve got the most renowned brands — first, there was Burger & Lobsters and then Luke’s Lobster also landed on our shores, with feverous queues

A Classic is a Cassic

You’d first notice two fluffy buns struggling to hold back an overflow of chunky scarlet lobster. To sharply showcase the lobster’s freshness, the seasoning was kept rather tasteful and subdued, submerging the palate in a crisp crustacean sweetness whilst carrying a sliver of brine.

Occasionally, light notes of lemon and creamy mayo still managed to creep in for some pizzaz. That said, the light buttery crisp of the buns was drowned out due to a slightly skewed proportion.

But perhaps the one iteration that really captured my attention at Luke’s Lobster was this special Sambal Achar Lobster Roll ($30.50) done in collaboration with celebrity chef Annette Tan, of FatFuku fame.

As part of the Luke’s Lobster Goes Local lineup in Singapore, this star-powered creation will be available till 15 Jan 2022.

Marrying sambal achar with lobster rolls may not sound alluring on paper but it was truly ingenious, in practice. Annette somehow manages to perfectly marry the one-of-a-kind twang of the achar with the briney richness of the crustacean, striking an impeccable balance.

This baby is filled to the brim with the most gratuitous of umami, crafted with the help of local sandwich maestros Park Bench Deli.

The magic is hidden in the mayonnaise, which was distilled from a gamut of smoked duck ham and dried shrimp for that heavy-hitting oomph. Luke’s Lobster then finished it with a liberal shower of fried shallots, to accentuate the brine even further.

While their reputation may lead you to believe they only have lobster rolls, you might be surprised to find out that Luke’s Lobster’s Clam Chowder ($11.50) is a chunky, comforting mess that will warm your tummy.

Even better, you can order some fries because the chowder is surprisingly a great accompaniment to the fries. You can also get the Lobster Bisque ($12.90) if you want a different soup but personally, I found it a tad too liberally with the salt.