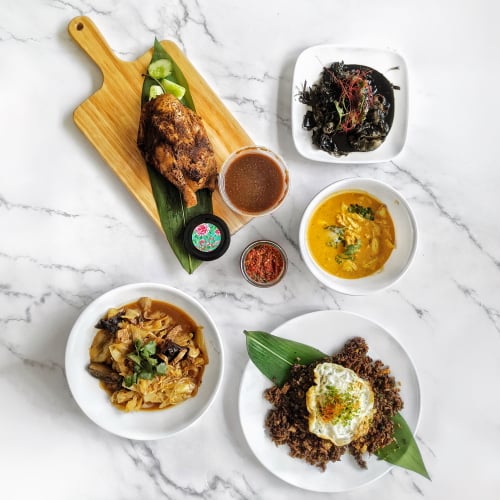 Peranakan cuisine is something many know but aren’t familiar with. Probably even less know that Singapore is home to the world’s first Michelin-starred Peranakan restaurant, Candlenut.

Candlenut is high on my wishlist because of its shining reputation, hence I took advantage of their circuit breaker menu where every dish was $20 (prices are back to normal now).

My Star of the Meal, Kueh Salat

That pandan custard felt like dreamy satin which fondled the palate with its heavenly aroma. Concurrently, the mellow saltiness of the sticky but airy glutinous rice provided a sublime counterpoint.

Akin to an elegantly crafted concerto without a trace of excessiveness, and allowed one to revel in Candlenut’s articulately orchestrated mix of flavours and textures. I could practically hear “Blue Danube” reverberating in my mouth.

Candlenut has a fresh take on a storied heritage

The aptest display of Candlenut’s culinary inspiration was this Assam Sotong ($24). The sauce was impossibly nuanced and boasted of delicate sour notes of Assam whilst lightly washed with gentle brininess.

With a robust and rich prawn stock, Candlenut’s delectable Chap Chye ($20) was unlike any other. Perfectly cooked components gave it a nice mix of textures. That crisp soft leafy crunch bolstered by strands of bouncy tang hoon — lovely.

A stimulatingly fragrant mix of gentle bitterness and umami from the Buah Keluak underscored this Buah Keluak Fried Rice ($24). The sunnyside up was too perfect but I didn’t regret poking into the yolk, which saw a silkiness coated onto each perfectly separated grain of moist rice.

A nice tamarind rub on the skin gave this Ayam Sioh Bakar ($20/half, $32/full) some beautiful umami. Dipping it in the sauce accentuated the juicy meat’s sweetness with a bold piquancy that brought out the flavours more strikingly.

Candlenut displays a phenomenal blend of heritage and culinary innovation worth the detour to Dempsey. Chef Malcolm Lee is obviously a chef proud of his heritage cuisine, but also one with the creative nous to push tradition into new territory.