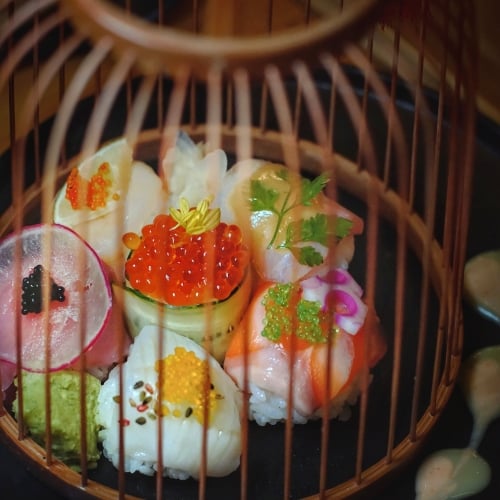 All Eyes on the Gorgeous Plating At Chura Sushi Bar

Sushi-making is an art in itself. It’s elegant and intricate. It’s minimalism at its finest. At Chura Sushi Bar, the art of sushi-making transcends the traditional doctrine of simplicity — it’s a modern interpretation that flaunts a certain pizzazz.

The Suntec City Japanese restaurant itself isn’t encumbered by any ostentatious frills or gaudy flashiness. In actuality, the space feels like it conforms to unpretentious design elements adopted by most typical Japanese restaurants.

Chura Sushi Bar’s facade greets patrons with a demure wooden wall and a familiar “美”  insignia luring us in with promises of beautiful artistry, while an illuminated marble counter sits right in the background, encircling sushi chefs who’re meticulously slicing through fresh produce.

Being an En Group offshoot, Chura Sushi Bar remains faithful to the principles of an elevated casual dining experience — the only distinction lies in fastidious planning behind the visual elements in the dishes.

Alas, that’s an area of contention for stringent purists who might think “is it just a gimmick?”

Honestly, the introduction was enough to assuage this skeptic, as the Ika Somen ($15) announced itself with billowing streams of dry ice smoke trickling past a bowl crammed with alabaster strands of squid, finished with a gleaming layer of Ikura and caviar.

The strands of squid somen were rivetingly buoyant while dressed in a dainty brackishness for a rather solid starter — it’s evident that Chura Sushi Bar’s emphasis on plating is not a means to compensate for mediocre dishes.

So did the voguish Chura Ladies’ Set ($24) where a svelte bird cage was set over six dainty pieces of Temari sushi, Okinawan style sushi where fish is laid supine over petite balls of rice, in contrast to Nigiri‘s oblong make.

For a casual sushi bar, the Chura Ladies’ Set was undoubtedly good value — the produce was fresh and the rice proficiently molded. Flanked by accessories including three appetisers and a mini udon, this is a satisfying combination that won’t leave you hungry.

More surprisingly, it was the cooked food that might have left the deepest impressions at Chura Sushi Bar. While not as chicly presented as the rest, the Kagoshima Buta Konteki ($18) more than made up for it with flavour.

As the old adage goes, “it is what is on the inside that matters.” And it’s especially true when you have lush wedges of Kagoshima pork immersed inside a sumptuous sauce that’s brimming with umami and citrus notes.

The favourite of the night, however, went to a surprise Cha Soba Salad ($12) intricately styled to resemble a mini garden, complete with a shimmering pond of pistachio sesame dressing. As inelaborate as it was, the immaculate bite on the Cha Soba and the worldly dressing fragrance perfectly hit the spot.

Visual sophistication aside, the kitchen at Chura Sushi Bar nonetheless serves up very dependable casual Japanese fare. It’s not mindblowing but it’s also not mere bells and whistles — if it doesn’t sacrifice the taste, who wouldn’t mind a touch of tasteful flair?