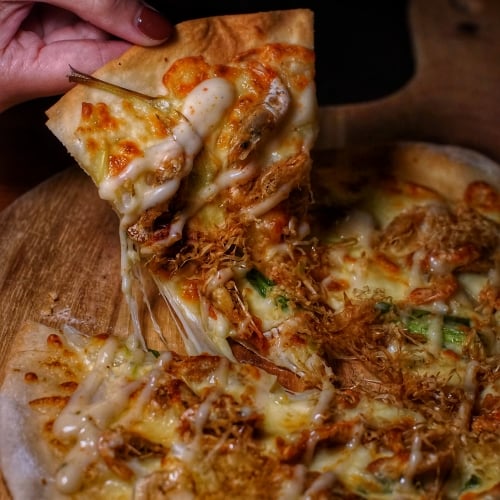 In the most unlikely of places, somewhere in Bukit Batok, there’s a craft beer gem hidden deep beneath. The place is Le Quest Mall and the gem? It’s Gone Rogue Brewing, a craft beer bar that makes its own unique brews.

You’d probably have never heard of it and that makes the find all the sweeter — at least if you’re a beer drinker. Supporting local is always the way to go and newcomers are a welcome sight in the ever-growing scene.

Would Le Quest Mall really be the best location for a craft beer bar? Who knows, we’ve seen weirder places blow up. The bottom line is that Gone Rogue Brewing was brave enough to venture into an untapped market.

Tucked away inconspicuously at the back of the mall, a relaxing mood is set by dim light fixtures. If “your friendly neighbourhood craft beer bar” existed, it would be Gone Rogue Brewing — a great spot for those in Bukit Batok to unwind and knock back a few pints.

Gone Rogue Brewing also serves food but the selection is more tailored to fulfilling your beer pairing needs. After all, beer-guzzling doesn’t quite feel the same without some gratifying bar bites at the ready.

True to its eloquent name, the Damn Crispy Chicken Skin ($11) is the easy-to-binge crunchy bar bite that every beer session needs. Made even more addictive when you coat it with the fragrant, fiery punch of their sambal chilli dip.

There are also an array of pizzas available on Gone Rogue Brewing’s menu. These aren’t artisan pizzas by any means so don’t expect stunning authentic pizza but the thin crust makes for another easy snack to complement the line-up of beer.

Bet on the almost okonomiyaki-like indulgence of the Kawa Ebi ($18) for more intrigue — spicy mayo, onion, ebi make for the perfect bedfellows with the distinctly aromatic bonito flakes.

With good food on the table, the next logical step is to complete it with drinks. For a place like Gone Rogue Brewing, ordering some of their special housemade craft beer brews would be imperative.

That said, there are hits and misses but your mileage might vary, especially with how subjective it can be to gauge quirky craft beer flavours.

The best way to go about ordering is to mix and match with a Four Taberna ($36) that affords you a sampling chance on a few beers out of the staggering eighteen that Gone Rogue’s Brewing has on tap.

Some interesting concoctions include the Elixir of Passion which boasted of a bright kiss of passionfruit and, if you’re feeling adventurous, the Hazelnut Trove is a lighter dark beer that’s made easier to drink with the soft touch of hazelnut.

For those who are just starting out on their craft beer adventure, Gone Rogue Brewing would be a good place to start. An interesting selection flowing freshly out of taps, some easy bar bites, and a no-judgment zone (in a scene that can get snobbish) makes this a cosy spot for light imbibing.