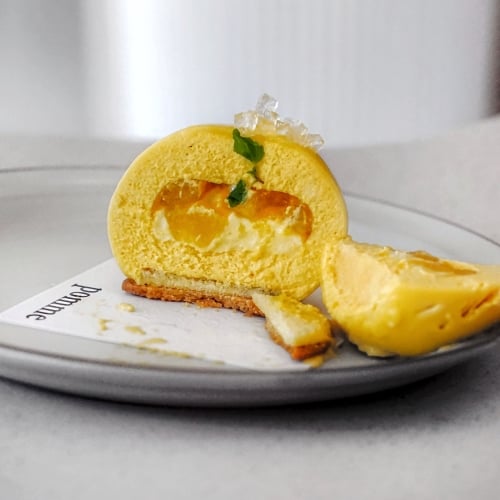 Boat Quay is a rather curious place that is bustling with lunch hour spots and after-work drink spots but the cafe ecosystem here is rather weak, as cafes come and go fleetingly — even the local sandwich titans had some trouble with keeping their Cubano shop Onda afloat for long. Though a few cafes have seemingly taken root in the area, one of the promising ones is the new Pomme.

Though this newcomer’s proximity to the main traffic might be a good sign, being located closer to Clarke Quay and in the good company of other top brunch hotspots including Dawn and Punch, all going strong.

Like the aforementioned two, Pomme is a cafe that takes heart to the most simplistic and minimalist design quirks. Though the all-encompassing white isn’t impressively creative, the clean monochrome and soothing creams make it a wonderful spot for an afternoon sojourn, especially with daylight streaming in through its glass doors.

As understated as the inordinate getup was, there were some charming details that make it feel a bit livelier than a mere xeroxed “minimalist white cafe”, something quite prevalent in Singapore’s over-saturated scene.

A lazy afternoon at any cafe is best started off with caffeination, hence I led with a cup of Iced White ($7) as my choice of poison — Pomme’s coffee menu is straightforward and only has Black, White, and Mocha for caffeine choices.

This wasn’t too bad for a cafe that’s more focused on being a patisserie — milky and robust in a well-balanced way that most people can enjoy. Perhaps not a cuppa with much depth or unique notes like what you’d get at a speciality coffee joint but it does the job as a sidekick to the pastries.

The cafe has one speciality that draws most people here — its range of intricate Petit Gateaux, particularly those vividly moulded into unique shapes like their iconic namesake, the Pomme ($11.50).

While tempting, the other fruity creation Manguo ($11) called out to me with its ingredient list and boy, does provide a delightful burst of fruity sweetness and tartness — good for freshening up during those sweltering afternoons.

Guilefully moulded into a mango-like sphere, the pastry is made up of a simple sable base and a plush cream exterior that splits apart to reveal an alluring orange core. At its core were spurts of mango and passionfruit vibrancy but Pomme ingeniously cuts through that brightness with yuzu jelly, introducing a sharp, punctuating acidity.

Dissected down to the core, Pomme doesn’t really do anything particularly adventurous with its pastry profiles but you have to hand it to them — the Petit Gateaux are pleasing to look at and simply enjoyed by most people.

That said, most pastries hang around the $10 mark which isn’t the cheapest but if you’re looking for a relaxing spot with well-made cakes that would brighten your day, this is exactly what the doctor ordered.